Grohe AG’s holistic commitment to 360-degree- sustainability is paying off – the company’s uncompromising integrated approach covering resource protection, environmental protection and social responsibility did not fail to impress the jury of the German Sustainability Award 2016. The world’s leading supplier of sanitary fittings and faucets has scored a top ranking for the third consecutive time, making GROHE one of the most sustainable major companies in Germany. GROHE was among the top 3 in the same category in 2015 and among the top 3 in resource efficiency in 2014.
“We are proud of our enduring success at the German Sustainability Award,” said Michael Rauterkus, CEO of Grohe AG. “It shows us that our passion and our commitment to sustainability are appreciated also outside our company. By presenting us with this award, the jury of experts has acknowledged the performance of our employees, who are willing to go that extra mile every day in order to meet our high demands made on sustainability.” 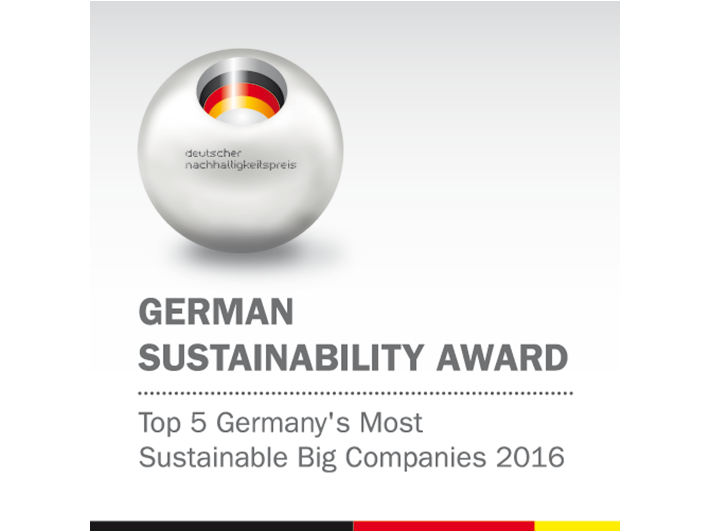 Improved sustainability in all areas

GROHE is constantly working to improve its sustainability through new product solutions and process optimisations. Among other things, the jury of experts based its decision on the company’s excellent sustainability management system, which helps to master challenges such as resource protection, demographic change, social responsibility and compliance. The combined heat and power plants installed in the production sites of Hemer and Lahr as well as the waste recycling ratio of almost 99 percent at all plants are just two examples of the investments made, and the expertise demonstrated, by GROHE in all areas of sustainability.

Among the most important innovations of the year is the GROHE Blue Home water system, which fits into virtually any kitchen. It delivers filtered and chilled water straight from the faucet, offering a choice between still, medium and sparkling refreshment. The carbon footprint is reduced by more than 60 percent compared to bottled water. Other milestones of GROHE’s sustainable development efforts include the GROHE Light brass alloy, which contains 35 percent less lead than conventional alloys, as well as the GROHE SilkMove ES technology, which ensures that only cold water is dispensed as long as the faucet lever remains in the default centre position. The reduced consumption of hot water helps users save energy and CO2 emissions.

The prize ceremony of the German Sustainability Award held at Düsseldorf’s Maritim Hotel on 25 November was attended by some 1,200 invited guests, among them corporate, government and political figures as well as representatives of the research sector and civil society. Needless to say, the entire event was planned and organised with sustainability in mind down to the last detail. The gala was hosted by the initiator of the Award, TV science journalist Stefan Schulze-Hausmann, with the prizes presented by such prominent figures as Malu Dreyer, President of the German Bundesrat, Federal Environment Minister Dr. Barbara Hendricks, and other high profile figures. Dr. Gerd Müller, Federal Minister for Economic Cooperation and Development, was the patron of this year’s event.

An initiative of the German Sustainability Award Foundation, the German Sustainability Award is endorsed by the Federal Government, umbrella organisations of local governments, confederations of business and industry, civil society organisations and research institutions. It has been presented on an annual basis since 2008 to companies who are role models in combining economic success with social responsibility and environmental stewardship and, since 2012, also to local authorities committed to sustainable local development.